Our Wine Forest Dried Chanterelles have a mild, earthy mushroom flavor with a hint of dried apricot, and will rehydrate with the intensity of flavor dried mushrooms provide plus a wonderful meaty texture that make them ideal for incorporation into vegan dishes, soups and stews.

How to rehydrate your dried wild mushrooms.

Where Do You Find Chanterelle Mushrooms? 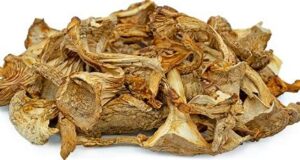 The beautiful chanterelle mushrooms are well loved and revered for both their mild fruity taste. and their impressive nutritional benefits. you’d like to give them a try yourself, but you aren’t willing to shell out the big bucks for a handful or two. So you’re wondering, where do you find chanterelle mushrooms in the wild? Can you collect them yourself?

Where Do Chanterelle Mushrooms Grow?

Chanterelles are a popular treat among mushroom enthusiasts all over the world. But they can be pretty expensive to buy. in many regions, you may be able to harvest your own.
Chanterelle mushrooms grow throughout the world. especially in North and Central America, Africa, Europe, and Asia. They prefer rich, moist soil and are c found in hardwood forests.
These pretty mushrooms tend to spread in areas where they’re common. especially as water runoff carries their spores along. If you’re hunting for chanterelles and you find a patch growing on the side of a hill. there’s a pretty good chance you’ll find more either uphill or downhill from this initial patch.

A day or two of heavy rain followed by a few days of hot weather provide the perfect growing conditions.
These mushrooms range in color from bright orange to yellow, so they are easy to spot and identify. They grow from soil, not trees. though they often share space with certain hardwood species.

WHERE DO CHANTERELLE MUSHROOMS GROW IN THE US?

Chanterelles are widespread throughout the United States. They will grow about anywhere with the right soil conditions and moisture.
Chanterelles found in the evergreen forests of Washington. mountainous regions of the southwestern US, and mossy glades in Georgia and Alabama. They grow in different seasons based on their geographical location.
For example, the prime season for finding chanterelles on the west coast is from September through February. Also, in Georgia, mushroom hunters report that chanterelle season lasts from late spring through the summer.
Not sure whether chanterelles grow in your region? You may be able to find out by checking with your local nature center. or by heading to the nearest stream or wooded area to look around.

Where Is The Best Place To Find Chanterelle Mushrooms?

Chanterelles grow in many different areas. But they have a few basic conditions they need to sprout and grow. It’s best to be aware of these conditions so you can choose the right time to go hunting for chanterelles.
These mushrooms will grow near most hardwoods. But tend to be most abundant around evergreens such as pine, spruce, and fir. In some regions, they may found growing near deciduous hardwood trees such as maple, oak, and beech.
In some states, they also grow well near blueberry plants. fields of grass or low-growing vegetation, or near streams.
Chanterelles tend to grow best at or above elevations of 1,500 feet. This is why they are found in mountains and hilly regions.
Like most mushrooms, they needs plenty of shade and moisture. They like warm, humid areas but will grow in cooler regions as well. provided there is enough moisture in the air and soil. And the temperatures stay consistent.
When searching for chanterelle mushrooms. It’s important to know exactly what you’re looking for. Chanterelles are easy to confuse with the toxic jack o’ lantern mushrooms, as shown in the video below:
If you’ve never collected mushrooms before, go with someone who has. You want to make sure you’re with someone who has experience identifying the edible mushrooms. and distinguishing them from the poisonous ones.
You’ll be able to identify the mushrooms yourself, but it’s best to play it safe at first.

Chanterelle mushrooms grow in shady, humid regions around the world. They prefer shady forest floors and grow well with evergreens. Deciduous hardwoods, and blueberry plants.
Chanterelles grow well in North and Central America, Africa. And various countries in the Eurasia region. In the United States, they grow in a variety of environments during different seasons.

Can Fresh chanterelles be dried, and if so how?

You can store chanterelle mushrooms fresh in the fridge, cooked in the freezer, or dried in the pantry. If you find yourself with a bigger harvest than you can use all at once. you might consider preserving the mushrooms so you’ll have them even after chanterelle season is over.

How to cook Fresh chanterelles?

Where can I buy chanterelle mushrooms?

We buy from the harvesters so they are the freshest chanterelles you can find. The Golden or Yellow Chanterelle is a very popular mushroom and versatile. The Chanterelle has a faint fragrance of apricots and an exquisite woodsy flavor. This is a perishable item and it must be refrigerated upon arrival.

How to identify false chanterelles?

How to freeze chanterelles for the winter?

To freeze boiled chanterelles for the winter, you must: +

When are chanterelles in season?

In the western United States, chanterelle season is from September through February. Again, the length of the season is dependent on the weather. Chanterelles are found throughout the United States, except for Hawaii. These mushrooms grow in the same spot year after year.

What are the best ways to clean chanterelle mushrooms?

Step-by-Step Process: How to Clean Chanterelles

Unlike most other mushrooms. which grow fast and produce large flushes of spores over a week or two. Chanterelles grow relative slow (2–5 cm per month), persist for an average of 44 days. And produce a continuous supply of maturing spores over a month. Or two (Largent, 1994; Largent & Sime 1995).

How to clean chanterelles?

Where can I buy Crimini mushrooms?

Where can I buy marinated mushrooms?

How do I identify magic mushrooms?

How to successfully freeze mushrooms?

There are three options to thaw frozen mushrooms safe:

Be the first to review “chanterelle mushrooms recipes” Cancel reply