What Are Matsutake Mushrooms? 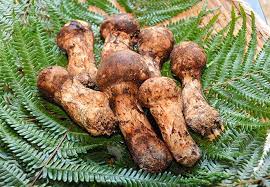 Matsutake mushrooms are a sought-after wild mushroom . That grows in parts of Asia and the western United States from early fall through midwinter. They’re known for their thick, fibrous white flesh and earthy, spicy flavor and aroma.

What Are Matsutake Mushrooms?

Original from Japan. matsutake mushrooms (tricholoma matsutake) grow wild in Japan, China, and Korea. The name “matsutake” means “pine mushroom” in Japanese after the pine forests. where these fungi grow. But, the mushroom is threaten in Japan and Okinawa due to habitat loss from development. and nematodes in the soil. which attach the roots of the trees these mushrooms need to grow.

What are Matsutake Mushrooms and why are they More Precious Than Gold?

Matsutake mushrooms, the highly-prized autumnal delicacy revered by fine-diners in Japan. are the world’s most expensive mushrooms. Their disappearing habitat in Japan means the price continues climb.
Of the genus Tricholoma. with the name Armillaria ponderosa, they are not as expensive as, say, white truffles. but Japanese Matsutake mushrooms are the most expensive mushrooms in the world. They have a rich autumnal flavour a meaty texture. and sweet aroma that is sought after by master chefs for matsutake recipes in ryōtei restaurants.
The matsutake mushroom, related to the Tricholoma magnivelare found in the Pacific Northwest. Has a long and storied history in Japan and South Korea. Mentioned in a seventh-century collection of Japanese poetry, Manyoshu. The delicious fungus has enjoyed by residents of the cities of Kyoto and Nara for over a thousand years. The matsutake mushroom was often given as a gift by the aristocracy. And even members of the Imperial family. Signalling the change of the season, the brown-scaled matsutake mushroom has, over centuries. Become a potent symbol of Japanese culture.
The large fungi, once a common site in Japan’s autumn markets, and found on the forest floor. Are no longer in such plentiful supply, But, and as they are impossible to grow, demand continues to rise.

People often use words like ‘spicy’ or ‘cinnamon’ to describe their flavour. They are very pungent and can overpower the flavour of other mushrooms or ingredients in a dish. They also have quite a piney note to them. Which is unsurprising given that they grow beneath pine duff.

How to clean and cook matsutake mushrooms 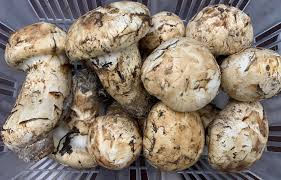 Chef recommend you wipe the mushrooms clean rather than washing them. They should then sliced to preserve their flavour. There is then a variety of different cooking methods to choose from. But the key is to keep it simple so the unique flavour is front and centre. They can skewered with oil and salt and broiled, boiled in broth, steamed, or even eaten raw.

What Price are Matsutake Mushrooms?

If you want to enjoy the unmistakeable. autumnal flavour of matsutake mushrooms, you will have to shell out. They may not be as expensive as some of the other high-end fungi like white truffles. but selling for about $1000 per pound (about €900 for 0.5 kg), they can compared to some rare varieties of black truffle. A typical punnet of about eight mushrooms can cost as much as $500.

Why are Matsutake Mushrooms so Expensive?

As disposable income in Japan has increased in the last few decades. coupled with the increased status of the mushroom in Japanese culture. Demand for matsutake mushrooms has continued to grow. Depletion of the mushrooms’ habitat – the red pine forests. Which have come under attack from the pinewood nematode. an invasive worm from North America – means supply of the fungi is ever-diminishing. The total annual harvest in Japan is now under 1000 tonnes.

What are Matsutake Musrooms used for?

Matsutake mushrooms are often given as gifts. Sometimes by companies to clients in season hampers. They are use in sukiyaki, a nabemono-style one-pot dish combining dashi, sake, mirin. And sugar. They are also used in matsutake gohan, a steamed rice dish made with kombu dashi, soy sauce, sake, and mirin. Because of their unique flavour profile. The mushroom us usually not over-worked and instead they are enjoy sliced in hot soups. or with steamed rice.

Can you eat pine mushrooms raw?

Yes, matsutake mushrooms can in the wild without being. Although of course you should always be sure you are identifying the fungus before you chow down. Some connoisseurs claim that eating matsutakes raw is the best way. To experience their full flavour and aroma. It is advisable to peel the stem and scrub or peel the cap if needed, and clean the mushroom well. The raw mushrooms can be prepare with an oil and salt.

How to Identify Matsutake Mushrooms?

Be the first to review “mushrooms matsutake” Cancel reply